With the Vietnamese glass market experiencing severe oversupply, new glass projects will not receive licences in the country. 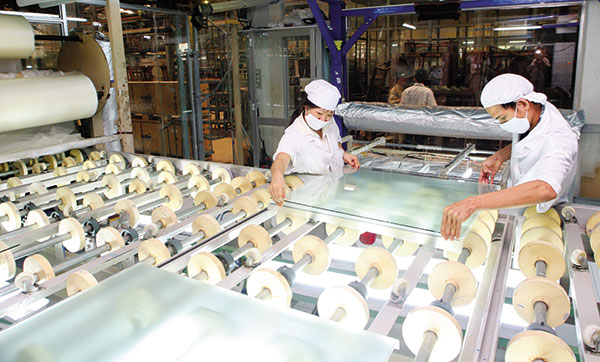 The only exceptions are special types of glass, which may be invested with the prime minister’s approval.
This information was confirmed by the Ministry of Construction (MoC) in its report on the glass market.  MoC reported that the total capacity of glass production in Vietnam is currently 285 million square metres per year. With seven facilities, float glass makes up 248 million sq.m of this, and patterned glass stands at 37 million sq.m per year.
“In addition, five float glass projects are currently invested with a total planned capacity of 181 million sq.m per year, which will increase Vietnam’s glass production to 466 million sq.m per year,” the report reads.
The report is in line with Decision No.1469/QD-TTg, dated August 22, 2014, approving the master plan on the development of Vietnam’s construction material industry through 2020, with a vision towards 2030. New glass projects will therefore no longer be licensed.
According to the Vietnam Glass Association, glass makers have reported in recent years that they had to run production below capacity, even temporarily suspend production due to high inventories and tough competition from cheap imported products from China.
For instance, in the southern province of Ba Ria-Vung Tau’s My Xuan A Industrial Zone, Japanese glass producer Nippon Sheet Glass suspended production of thin flat glass used for displays for a few months starting in May 2016.
The production of special types of glass can still be licensed on a case-by-case basis, as projects may be invested after obtaining the prime minister’s approval. The prime minister also demands the use of state-of-the-art technology in the extraction process, with minimal usage of explosives to limit environmental damage.
In July 2017, construction was started on a production facility for ultra-clear float glass, mainly used in solar panels, in Ba Ria-Vung Tau, to meet the rising demand of the solar power industry.
The project is developed by Phu My Ultra Clear Float Glass Co., Ltd, a consortium of local firm Viglacera, Vietnam Urban and Industrial Zone Development Investment Corporation, and China’s Kaisheng Group. It is estimated that Phase I, capitalised at $110 million, will be completed this year. It is expected to churn out 600 tonnes of product per day, with output rising to 1,500 tonnes of product after Phase II is completed.
Viglacera general director Nguyen Anh Tuan said at the company’s annual shareholders’ meeting that ultra-clear float glass is a new field that requires high technology, prompting Viglacera to seek out tech-savvy partners.
This kind of glass meets quality standards for use as solar panels and screens for televisions or telephones. It is a special glass product as stipulated in Decision 1469, thus this type of product can only be invested when approved by the prime minister.