April 23, 2018 marked the deadline of the six-month period given to Vietnam to improve performance in preventing illegal, unreported and unregulated (IUU) fishing under the European Commission (EC)’s yellow card warning 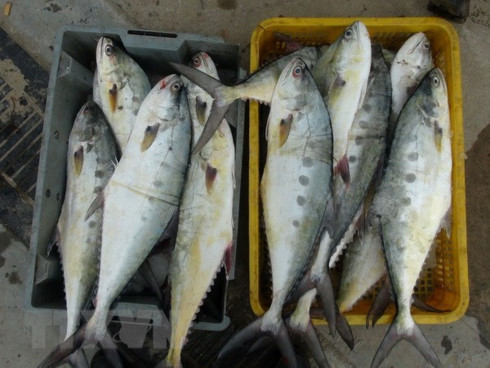 During the period, the Government and the Ministry of Agriculture and Rural Development (MARD) along with the business community and parties involved in the seafood production chain have taken synchronous measures from perfecting the legal framework, tightening the management over fishing vessels, increasing punishments on illegal fishing, and improving the awareness of fishermen and businesses of IUU fishing.

All these activities are aimed at regaining the EC’s green card and developing sustainable and responsible fisheries, said Nguyen Quang Hung, deputy head of the MARD’s Directorate of Fisheries, in an interview granted to the Vietnam News Agency.

According to the official, the EC’s yellow card has affected the export of Vietnamese seafood. Examinations on material origin were conducted on all consignments to the EU, which caused a loss of around EUR7,000 per container.

The warning has had negative impact on the prestige of the Vietnamese fishery sector as Europe is one of the largest importers of Vietnamese seafood, he added.

Therefore, Vietnam has taken national efforts to have the yellow card removed, which brought about positive outcomes.

Hung noted that there is only one case of illegal fishing by Vietnamese fishermen in island states in the Pacific, while 11 other cases happened in bordering waters that are yet to be delimited between Vietnam and other countries.

The official highlighted the actions taken by the Vietnam Association of Seafood Exporters and Producers, which has called on enterprises not to purchase products exploited illegally, and issued a white book naming violated fishing vessels so that processors and exporters do not buy these vessels’ products.

Hung continued by saying that the warning from the European Union creates pressure for Vietnam to improve its fishery sector.

All the nine recommendations made by the EC are significant to the sector, he said, adding that the recommendations were put into the Law on Fisheries which will become effective in January 2019.

The Prime Minister also signed Decision No.78 approving a national action plan on preventing, reducing and eliminating IUU from now to 2025.

For long-term measures, Hung stressed the need to tighten management over fishing vessels, especially those operating offshore, review the development plan for the domestic fishing fleet in alignment with the seafood reserves, and intensify the enforcement of seafood origin and fishing diary declarations in line with regional and international regulations.

In September 2017, the European Commission issued a yellow card warning Vietnam for failing to progress in fighting IUU fishing.

After April 23, the EU will assess Vietnam’s efforts to fight IUU fishing. The "yellow card" is followed by a "green card" if the problem is resolved or a "red card" if it isn’t. A “red card” can lead to a trade ban on fishery products.