The government has adopted a determined stance despite a slowdown in the industrial sector, a smaller rice harvest and a widening trade gap. 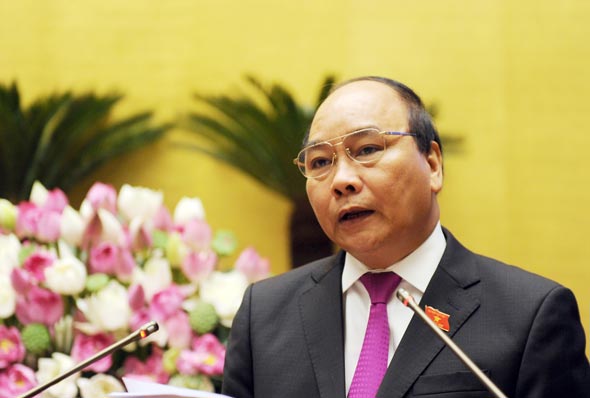 Vietnam will not alter its annual growth target of 6.7 percent for this year even though the economy has seen its slowest first quarter expansion in three years, but more efforts are required to reach the goal, the government said.

Vietnam's economy, one of the world's fastest growing, has been dealing with a slowdown in its industrial sector and a pork surplus crisis so far this year, along with lower rice output and a widening trade deficit.

"Solutions for both supply and demand in order to achieve the 6.7 percent growth target require greater efforts and stronger determination," Phuc was quoted in the statement as telling the cabinet meeting.

The country's industrial output rose 5.1 percent in the first four months from a year ago, below the 7.4 percent growth posted in the same period last year, the government's General Statistics Office said.

In the first quarter ending March, GDP grew an estimated 5.1 percent from a year ago, the slowest pace in three years, with the industrial sector suffering from its smallest expansion since 2011.

In the first four months, more than 27,400 companies halted operations, the government said.

Vietnam's trade deficit was estimated at $2.74 billion in the January-April period, a jump of 56 percent from a year ago, after imports rose faster than exports to facilitate domestic production.

"We've got some tough tasks ahead if we want to achieve the 6.7 percent growth target for this year," Phuc told ministers and government officials at the meeting.

He asked the industry and trade ministry to examine 31 products with a view to increasing output of crude oil and coal.

Specific instructions were also given to the construction, agriculture, banking and service sectors in order to raise their contributions to the nation's economic growth.

A Communist Party meeting that opened on Friday will discuss the reform of state-owned enterprises to increase efficiency and policies to encourage the development of the private sector, the government said in a separate statement.

The week-long meeting will also review disciplinary measures against several key officials and develop a plan for the economy until 2020.

Vietnam's economy needs to hit quarterly expansion of 7.1 percent for the rest of the year in order to achieve the 6.7 percent annual GDP growth target, according to the Ministry of Planning and Investment.

The scenario suggests annual growth of 6.26 percent for the second quarter ending June, 7.29 percent for the third quarter and 7.49 percent for the final three months, providing the country's total investment for development reaches 35 percent of GDP, and production and export both achieve positive growth.

In April, the Asian Development Bank raised its forecast for Vietnam's GDP growth this year from 6.3 percent to 6.5 percent, while the World Bank forecasts 2017 growth at 6.3 percent.

Last year, an El Nino-induced drought, an environmental disaster and unfavorable global economic conditions put a brake on Vietnam's GDP growth, holding it at 6.21 percent, the first slowdown since 2012, placing it behind India, China and the Philippines in Asia.