Vietnam, US sign $12 billion in trade deals during Trump's visit to Hanoi

Agreements in aviation and energy were signed as the U.S. President called for 'fair and reciprocal' trade with Vietnam. 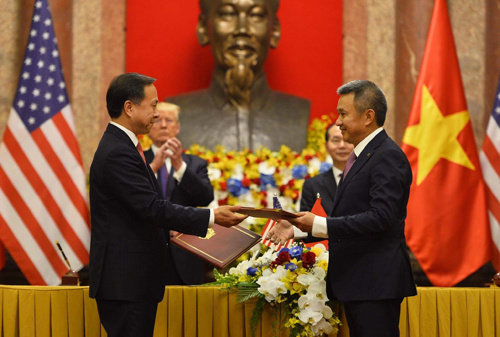 Vietnamese and American businesses signed agreements worth a total of $12 billion on Sunday morning in Hanoi as part of U.S. President Donald Trump’s state visit to Vietnam.

The deals include an aircraft engine maintenance and purchasing contract and liquified natural gas supply and storage projects.

Vietnam Airlines and private carrier VietJet signed contracts to buy engines from American aerospace manufacturer Pratt & Whitney. The national carrier is going to add 20 more aircraft to its fleet in the next two years while the latter is planning to add 10.

Vietnam’s airline market is growing at the third fastest pace in Asia-Pacific. Passengers on domestic flights soared 35 percent to 28 million in 2016, accounting for more than half of the total air travel in the country.

Vietnam Airlines, Jetstar Pacific, VietJet and the newly founded Vietstar are planning to expand their fleets to a total of 263 aircraft in the next four years. Vietstar is still awaiting an aviation license.

Pratt & Whitney has been working with the Vietnamese aviation industry since the 1990s.

President Trump arrived for his first state visit to Hanoi on Saturday evening after attending the APEC Summit in Da Nang, around 800 kilometers (500 miles) to the south.

During a press conference held with his Vietnamese counterpart Tran Dai Quang on Sunday morning, Trump repeated his APEC speech theme of free Indo-Pacific trade relations, saying the U.S. is looking forward to “fair and reciprocal” bilateral trade with Vietnam.

Vietnam is Southeast Asia’s biggest exporter to the U.S., and the U.S. trade deficit with Vietnam is a concern for Trump’s protectionism policy.

“The U.S. is enthusiastic about reforms that promote economic transparency for all in Vietnam” and about looking to “remove unfair trade practices in the region,” he said in Hanoi.

Vietnam is the fourth and longest leg of Trump’s 12-day Asia tour, the longest trip to the region made by an American president in more than a quarter of a century, which is aims to boost ties and seek support in counterating the nuclear threat from North Korea.

He visited Japan, South Korea, China before Vietnam, and will later head to the Philippines where he will attend a dinner to mark the 50th anniversary of the Association of Southeast Asian Nations (ASEAN) before celebrating the 40th anniversary of U.S.-ASEAN Relations the following day.