Vingroup's founder has gained a staggering $1 billion in the last 8 months. 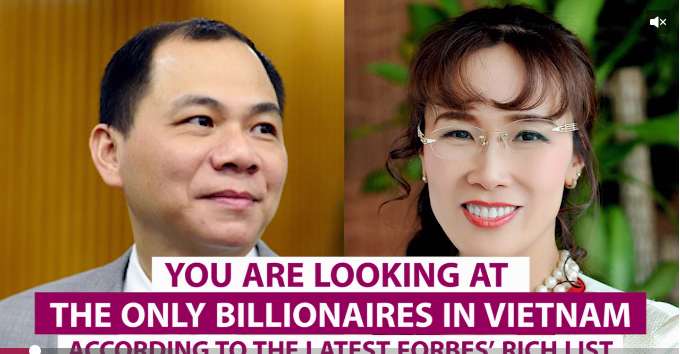 Pham Nhat Vuong, founder and chairman of Vingroup JSC., was the world's 640th richest person with a net worth of $3.5 billion as of 5 p.m. GMT on November 8.

Since the release of Forbes' 2017 billionaires list in March, when Vuong was ranked 867th, his net worth has increased by over $1 billion. This gain is largely attributed to Vingroup's shares gaining nearly 50 percent in the last six months and the IPO of Vingroup subsidiary Vincom Retail earlier this week.

Meanwhile, the U.S. president and real estate mogul dropped from 544th to 734th with a net worth of $3.1 billion. His fortune has been declining over the past year due to a tough New York real estate market, a costly lawsuit and an expensive presidential campaign, according to Forbes.

At the top of the billionaires list was Amazon's founder Jeff Bezos with a net worth of $94.9 billion, followed by Microsoft co-founder Bill Gates at number two with $89.5 billion.

Vingroup is one of Vietnam's largest real estate conglomerates, and has also been expanding rapidly into retail, logistics, agriculture, education and healthcare. As of the end of September, its subsidiary Vincom Retail was managing, operating and renting 41 shopping malls with a total area of over 1.1 million square meters (272 acres). It also has 22 projects under construction and another 50 in early development.