The companies that built the substandard vessels have offered to recompense, but fishermen say it's not enough for the losses. 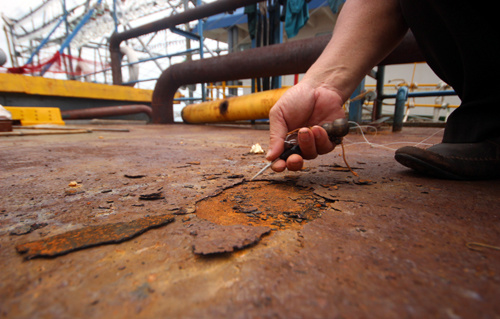 A fisherman in Binh Dinh Province shows the rust on his steel fishing boat.

The two Vietnamese companies responsible for building substandard fishing vessels have promised to pay compensation, but some of the affected fishermen say the offers are too low.

Under a government-backed scheme in 2014, fishermen in the central province of Binh Dinh were given soft loans to build steel-clad fishing boats.

Nam Trieu One Member Company Limited and Dai Nguyen Duong Shipbuilding Company were then contracted to build them.

But so far, the supposedly modern boats worth hundreds of thousands of dollar each have caused more harm than good.

The owners of ten of these vessels in Binh Dinh had signed a petition to complain about the quality, a senior fisheries official told VnExpress late last month.

According to the fishermen, these boats had so many problems, including with their generators and cold storage facilities, which caused them huge losses.

The two companies last week reportedly sent some representatives to talk with the fishermen in the province, offering compensation payouts of VND100-200 million ($4,400-8,800) per vessel. They tried to convince the owners to take their complaint back.

But several of the owners said the offers are low and that they also have doubts about the documents that the shipbuilders want them to sign.

Last Friday, the company providing generators manufactured by Mitsubishi for those boats also found out that the generators used for these vessels may not be authentic products.

The agriculture ministry has been assigned to handle the case.

So far inspectors have found that these rusty boats are in serious disrepair or have showed signs of wear with molluscs covering their hulls, even though they were first put into use only a few months earlier.