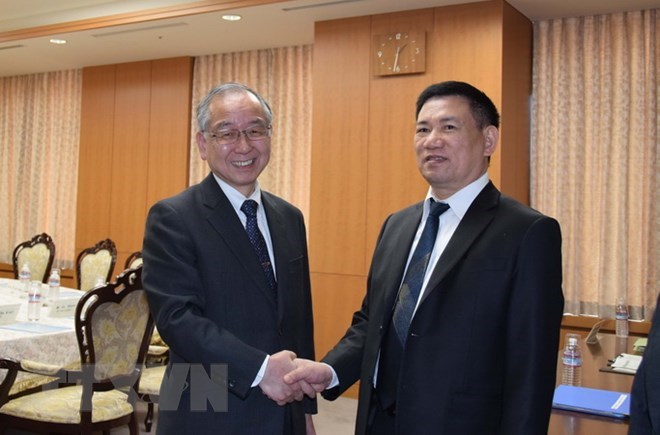 During his meeting with AC President Teruhiko Kawato in Tokyo on April 10, Phoc said the SAV wants to receive cooperation from the AC, stressing that this will help elevate the SAV’s development to a new height as well as ensure its functions and missions as assigned by the National Assembly and the State. Vietnam and Japan have enjoyed a fruitful strategic partnership in the past time and the East Asian nation is currently the largest provider of ODA for Vietnam with 2.6 trillion JPY (some 24.3 billion USD), Phoc noted, adding that as the SAV is entrusted with auditing ODA funds in Vietnam, collaboration between the two audit bodies will be tightened in the future. On the occasion, he thanked the AC for giving support to Vietnam in the past years, hoping that the two agencies, both being members of the International Organisation of Supreme Audit Institutions (INTOSAI) and the Asian Organisation of Supreme Audit Institutions (ASOSAI), will fortify solidarity and bilateral cooperation to develop INTOSAI and ASOSAI. Teruhiko, for his part, said that the two audit agencies have seen sound cooperation, not only through the INTOSAI and the ASOSAI but also through the exchanges between the two countries. With meticulous preparations, the SAV will successfully organise the 14th Assembly of the ASOSAI in September 2018 and as an ASOSAI member, Japan pledged to make every effort to contribute to the assembly’s success, he stressed. Regarding the cooperation programme, Teruhiko said that together with applying IT in data analysis to improve audit efficiency, the AC is developing an audit information system to strengthen audit security. Japanese tax system as well as auditor training programmes and plans were presented at the meeting. Teruhiko hoped that Japanese experience will be worthwhile for the SAV.