'The health situation is not yet critical at this point, but we fear that this may worsen in the coming days with prolonged displacement.' 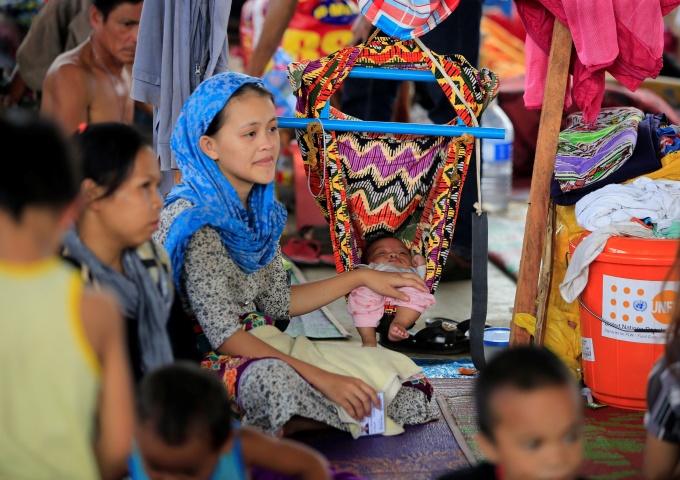 The onset of the rainy season could worsen the situation, the International Committee of the Red Cross (ICRC) warned as it said it had already observed a spike in diarrhoea, respiratory illnesses and other ailments.

"The health situation is not yet critical at this point, but we fear that this may worsen in the coming days with prolonged displacement," said Jose Amigo, health coordinator for the ICRC in the Philippines.

About 240,000 people have been displaced by the fighting in Marawi, according to the government.

The unrest began more than two weeks ago when hundreds of militants rampaged through the city waving black flags of the Islamic State (IS) group.

President Rodrigo Duterte said the attack was part of a wider plot by IS to establish a base in the southern region of Mindanao, and declared martial law there to quell the threat.

Twenty civilians have been confirmed killed due to the fighting, according to the government, but the true number is likely to be higher with authorities yet to fully assess the roughly 10 percent of Marawi still being held by the militants.

About 2,000 people are also believed to still be trapped in those areas with some being used as human shields, according to authorities.

Meanwhile, about 90 percent of the evacuees have sought shelter in the homes of relatives and friends rather than evacuation centres, according to government data, and aid workers have not been able to help all of them.

Among those staying with friends and relatives was Emmalyn Macababayao, 37, who told AFP her one-year-old son died after getting sick during a six-day ordeal to escape Marawi.

"While fleeing I held on tight to my elder son with my left hand while the other was breastfeeding," Macababayao said as she began to cry.

"The baby that time felt so hungry. It was raining so hard, we all got wet. It was a long walk, I was just crying, feeling helpless and in despair. But I kept holding tight to my children. I felt so afraid... I was alone."

She said her son died three days after reaching a relative's house, after not being able to get medical treatment for a fever and diarrhoea.

The Philippine military said Friday it hoped to defeat the militants by Monday, which is independence day.

But heavy fighting continued in parts of Marawi on Friday, according to an AFP journalist.