Oysters from northeast Vietnam start shipping to the EU

Up until about a decade ago, the fledging oyster industry along the north-eastern coast of Vietnam in the provinces of Thai Binh and Nam Dinh had virtually zero production, say local officials. 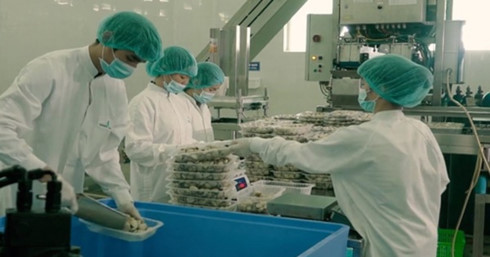 Then, under the guidance of a team of Australian shellfish experts headed by Dr Wayne O'Connor from the Port Stephens Fisheries Institute in New South Wales all that began to change.

Within four short years, 2007-2010, production really began to take off, surging to roughly 2,000 metric tons per annum largely due to improvements at the Vietnamese government-owned oyster hatchery on Cat Ba Island.

That growth rate was somewhat remarkable considering that oysters start out as larvae, so small that they are invisible to the naked eye. After about a year, they can grow to 16-25 millilitres and usually reach market size anytime from 18-24 months.

The hatchery at that time was also producing an estimated 100 million spat a year.

Oysters are a type of shellfish that when they reproduce, spawn tiny larvae that freely navigate the waters until they find an appropriate habitat with a structure to settle on. Once the larvae permanently attach to a surface, they are known as spat.

Although at that time the industry in the two north east provinces showed great promise, it quickly evaporated largely because of the choices that farmers made to use the cheapest production methods.

They chose to grow oysters in clumps on recycled shells, which were hung on rafts. This method resulted in oysters of unequal size and shapes, which greatly reduced their marketability and the price consumers were willing to pay.

The oysters raised had little to no ability to sell profitably in the export market.

The Dutch company Lenger Seafoods is now collaborating with the Nam Dinh Province People’s Committee to transform the industry and bring it out of the doldrums and into compliance with international norms.

Nguyen Phung Hoan,vice chair of the Committee, said that currently there are about 2,000 hectares in the province devoted to oyster farming. To date most of production has either been consumed locally or shipped to Chinese buyers.

Lenger Seafoods based out of the Netherlands has just opened a newly constructed facility to process oysters for export. It has also worked diligently to establish a supply chain, from breeding, harvesting, to transporting and processing, in line with the strictest of international standards.

The management of Lenger claim they can produce up to 300 metric tons of oysters per day— and already have begun to export product to markets in the EU such as Italy.

Key markets the management stated it is focusing on expanding into include the Netherlands, Spain, France, the Republic of Korea, Japan and US.

This is good news to the many young Vietnamese looking to get in on the action. At a recent conference in Nam Dinh Province, more than one third of the attendees were young people interested in starting oyster businesses that export to overseas markets.