As the storm clears, some of the most important leaders in the world are slowly descending on Da Nang. 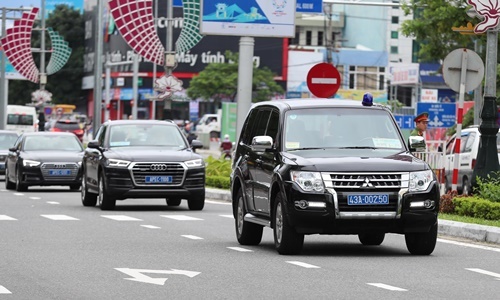 The presidents of Peru and Mexico and the chief executive of Hong Kong touched down in Da Nang on Thursday morning while Brunei's Sultan Hassanal Bolkiah arrived in the afternoon.

Chilean President Michelle Bachelet and Canadian Prime Minister Justin Trudeau arrived in Hanoi for a state visit on Wednesday. Bachelet is scheduled to leave for Da Nang on Thursday night and Trudeau on Friday morning.

On Wednesday, President Peter O’Neill of Papua New Guinea, which will host the APEC Summit next year, arrived along with Filipino President Rodrigo Duterte, who will be giving a speech on economic integration.

James Soong, Chairman of the People First Party of Taiwan, has been in town since Tuesday.

U.S. President Donald Trump will arrive for the APEC event on Friday after wrapping up his Beijing visit. Following the Leaders’ Meeting on Saturday, he will head for Hanoi for an official state visit the same day.

China’s Xi Jinping will pay a state visit to Vietnam on Sunday.

APEC Leaders’ Week opened on Monday and is scheduled to welcome between 12,000-14,000 delegates, including politicians and businesspeople