Police have taken over the investigation, which could lead to fraud charges punishable by up to 15 years in jail in Vietnam. 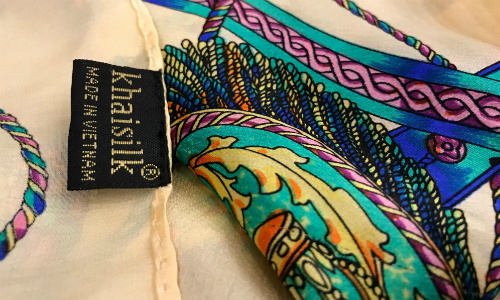 Prominent Vietnamese fashion brand Khaisilk is in the hot seat once again for selling Chinese counterfeits instead of genuine silk products, according to a new report that could lead to criminal charges against the owner.

The Ministry of Industry and Trade said in a statement Tuesday that tests conducted on samples of Khaisilk scarves that the company claimed to be 100 percent silk found they contained none of the prized material.

Police have taken over the investigation, which could lead to fraud charges. Manufacturing and/or trading in fake goods is punishable by up to 15 years in jail in Vietnam.

Khaisilk was a renowned high-end brand with a history of over 30 years until allegations of fraud were made last October.

A business in Hanoi complained on Facebook that products it had bought from the brand were actually made in China.

According to the post, the company bought 60 Khaisilk-branded scarves at a shop in Hanoi for VND644,000 ($28) each, but one scarf had two tags: “Khaisilk Made in Vietnam” and “Made in China”.

The company said it had checked the rest of the scarves and found evidence that other “Made in China” tags had been removed.

The General Customs Department said that Khaisilk had imported many products from China and Thailand between 2006 and 2009, but started reselling products from other retailers in 2012 by attaching its own brand tags.

Khai Duc Co. Ltd. has closed all of its stores following widespread calls to boycott its products. The scandal has come as a shock to many customers, reinforcing widespread doubt over the capability of local market management authorities.

Vietnam’s government leaders have ordered the investigation to be wrapped up by December 15.