HCM City creates conditions for all economic sectors to invest

On 24/8, the Department of Planning and Investment in collaboration with the HCM City Finance and Investment State-owned Company (HFIC) held "Conference to connect investors with banks, credit institutions participating in the implementation of projects belonging to 7 breakthrough programs of the city". 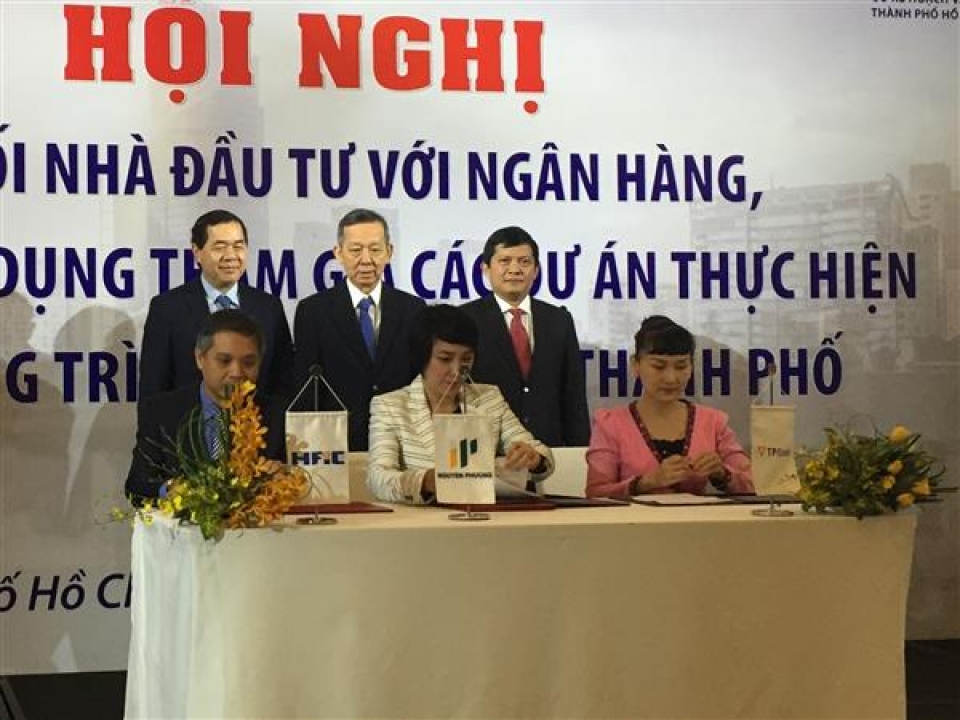 The conference was organized with the aim of calling on banks and credit institutions together with enterprises, domestic and foreign investors to co-operate in financing activities, lending to ensure the success of investment projects; speeding up the implementation progress and calling for socialization of investment into 7 breakthrough programs in accordance with the Resolution of the Tenth Party Congress.

Also, there was the signing ceremony of loan agreements of 8 investment projects with banks under the form of PPP public partnerships with the total investment capital of 26,000 billion VND. In particular, HFIC continues to promote the role of strategic investors and calling for economic sectors and mobilizing all resources of society to invest in key infrastructure projects.

Attending the conference, the Chairman of HCM City People's Committee, Mr. Nguyen Thanh Phong assessed the connection between banks and infrastructure investors at the conference as the highlight of the city to solve the problem of lack of capital for infrastructure investment. In the context of public debt pressure, the source of funds for investment is limited. Accordingly, it creates a driving force and motivates the attraction of potential investors to decide on investment in the form of public-private partnerships in the city in the coming time.

Mr. Phong said that currently, HCM City's biggest advantage was the high economic growth. The city is well suited to be in the top 10 world-class cities if there is a specific fiscal and financial mechanism that starts up the capital of credit institutions and idle capital among the people. Therefore, the Head of Ho Chi Minh City authorities suggested immediately after this conference, the City Development Research Institute should urgently complete the scheme of breakthrough mechanisms and policies of the city according to the conclusion at the conference times 11th Party Executive Committee of the city.

In addition, Mr. Phong also affirmed that the city would continue to improve the business investment environment, strongly apply information technology, build e-Government and remove bottlenecks on administrative reform. "The city will put the auction, tendering into the main mode of allocating resources and create conditions for all economic sectors to access to investment opportunities in the city”, Mr. Phong stressed.

Speaking at the conference, Mr. Su Ngoc Anh, the Director of Department of Planning and Investment of Ho Chi Minh City said that the total demand for investment capital development in the period 2016-2020 was estimated at over 1.8 million billion VND. In particular, the traffic, environment, flood control, rehabilitation, urban development and other areas under the 7 Program of Action of the city were estimated at about 850,000 billion, accounting for about 46%. However, the ability to balance the city budget only meets about 20% of the total capital needs as mentioned above. In the context of limited budget capital, the attraction of domestic and foreign investment is considered as an effective solution, contributing to the sustainable development of the city’s economy.

Mr. Pham Phu Quoc, the Director General of HFIC said that HFIC strived to seek and mobilize domestic and foreign interest rates for investment projects. Specifically, HFIC has attracted funding from prestigious international financial institutions such as the World Bank, the French Development Agency (AFD), the Asian Development Bank (ADB) Especially, with its experience and prestige, HFIC has been recommended by international partners for direct lending not through Government’s guarantee, contributing to reducing public debt for the State budget.

In order to further promote the attraction of private resources for investment and development of the city, Mr. Ngoc Anh said that the Department of Planning and Investment basically completed the construction of specialized PPP information pages, which was expected to officially launch at the end of March 2017 on the website including the introduction of investment in the form of public-private partnerships such as the relevant investment, updated list of projects calling for investment in the city, information on the implementation of projects in the form of public-private partnerships, related investment promotion activities and project models in the public- private international form.

In addition, based on the approval and direction of the People's Committee of HCM City, the Department of Planning and Investment is also coordinating with HFIC to develop a project to set up Project Development Fund (PDF) to support research infrastructure projects in the form of public private partnership in the city, contributing to speed up the implementation and efficiency in the coming time