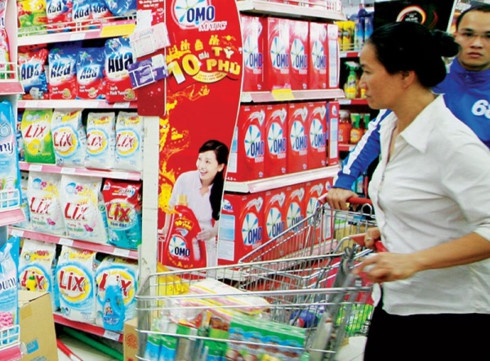 Several years ago, the domestic detergent market was the playing field for the two big players – Unilever and P&G. However, since 2012, the appearance of Vietnamese brands has changed the situation.

A branding expert said the two big players can dominate the market partially because of costly advertisement campaigns they launch every year. Unilever spends big money on Omo, Viso and Surf brands, while P&G, after a long period of focusing on Tide, has begun running ad campaigns for Ariel.

In May, 2013, Omo launched a program about ‘the greatest number of stains which can be cleaned in the shortest time’. In June 2013, Ariel replied with the program ‘the one step wash power’ in Hanoi, Danang and HCM City.

Later, P&G offered a discount rate of 20% for Ariel products, while Unilever ran another noisy marketing campaign. The latter also has a cooperation program between Omo and the seven largest washing machine manufacturers.

A branding expert commented that Unilever is dominant in Vietnam because its products are perse and target different groups of customers – Omo for high income earners, Viso for the mid-end market and Surf the lower end. Meanwhile, P&G only has Tide for the high-end market.

However, P&G has tried to expand market share launching Tide Simply Clean and Fresh, a product believed to target the mid-end market in February 2014.

Though the domestic market is controlled by the two big players, there is still room for Vietnamese manufacturers to make money.

The Aba brand began competing directly with Omo and Ariel in 2012. At first, Aba was mostly advertised on billboards and posters, but later, it began appearing in TV ads, which has helped the brand become the third largest shareholder, after Omo and Ariel.

Vietnamese detergent brands such as Lix, Net, Vi Dan, Bay, Duc Giang, My Hao and Aka can survive in a competitive market, but most of them target the low-cost market segment and earn money from doing outsourcing for big brands and from exports.