He will meet with leaders in Hanoi and university students in Ho Chi Minh City before stopping in Da Nang. 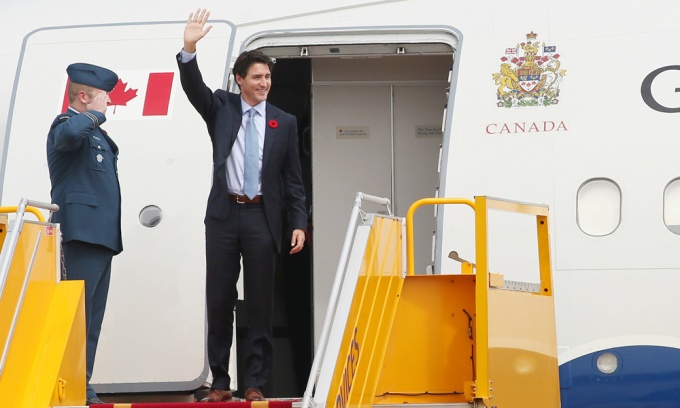 Canadian Prime Minister Justin Trudeau has arrived in Hanoi on Wednesday morning for his first official visit to Vietnam, which will include a trip to Ho Chi Minh City before the Asia Pacific Economic Cooperation (APEC) Summit in Da Nang.

Trudeau is scheduled to hold a joint press conference with his Vietnamese counterpart Nguyen Xuan Phuc and meet with other Vietnamese leaders in Hanoi on Wednesday.

He will join the APEC Summit on Friday, when U.S.'s Donald Trump, Japan’s Shinzo Abe and China’s Xi Jinping are expected to speak at the CEO Summit.

The Leaders’ Meeting, the most important event of the summit, will be held on Saturday, gathering leaders from the 21 APEC economies.

Trudeau, 45, visited Vietnam as a traveler in 1995. His arrival as a political leader comes amid growing ties between Canada and Vietnam.

Vietnam is Canada's biggest trade partner in Southeast Asia. Two-way trade has been increasing steadily between the two counties, reaching $4.1 billion in 2016 and $2.34 billion in the first eight months of 2017, a 20 percent increase from the same period last year.